How to support bees in a heatwave

Extreme summer heat events are stressful for people. These heat waves can also stress bees. Many gardeners put out shallow trays of water and pebbles to help the bees. What is the science behind this? 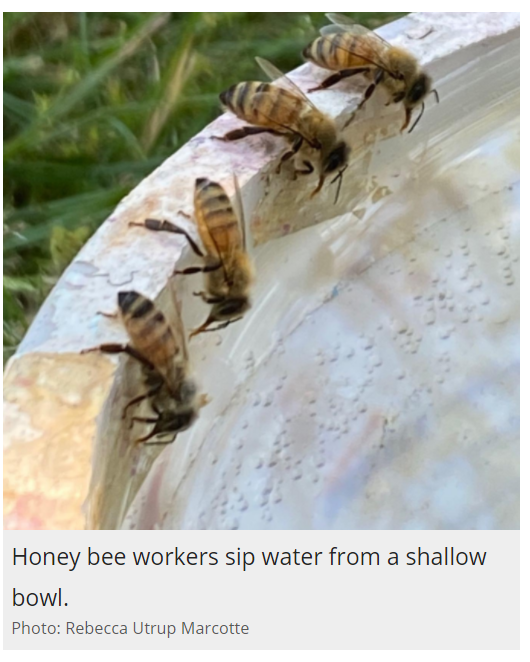 The bees distribute droplets of water around the nest, which works in parallel with the fanning to create the equivalent of honey bee AC.

Honey bees are somewhat adapted to extreme heat. As soon as temperatures in a honey bee colony edges up beyond 96.8°F, worker bees line up at the front of the entrance and start fanning their wings (Winston 1987). In addition, a special group of water-foraging bees begin scouring the surrounding area for water, which they collect and bring back to the nest (Kuhnholz and Seeley 1997). The bees distribute droplets of water around the nest, which works in parallel with the fanning to create the equivalent of honey bee AC, or air conditioning. As temperatures rise to extreme heat levels, more honey bees will start to forage for water (Vanderplank et al. 2019).

Shallow trays of water with pebbles in the bowl may be placed outdoors or in the garden to support honey bees in a heatwave. The pebbles or small rocks keep worker bees from drowning in the water when they come for a sip.

Bumble bees may not be able to cool their nests as effectively as honey bees. Although bumble bees engage in fanning behavior during extreme heat events (Gardner et al. 2006), they are better adapted to warm up their nests during cold spells (Heinrich 2004). Large thoracic muscles allow bumble bees to produce heat by ‘shivering’. The thick ‘fur’ of bumble bees helps them to retain heat in their bodies. Both of these traits are thought to be adaptations that help bumble bees warm their hive and to forage at lower temperatures.

Individual bumble bees have a remarkable amount of control of their circulatory and respiratory systems. This helps them to not only conserve heat in their thorax when outside temperatures are cold (allowing them to fly at temperatures as low at 40°F), but also to ‘dump’ heat into their abdomen when ambient temperatures creep above 100°F.

There is limited information on how bumble bee colonies keep cool during heatwaves. Although bumble bees have been seen collecting water (Ferry and Corbet 1996) it’s not clear whether the water is used for cooling their nests. As nest temperatures rise above 90°F, bumble bee queens and workers stop incubating the brood, move off the nest, and the workers begin fanning. By fanning, bumble bees have been shown to lower the temperatures of their nests by 10°F (Gardner et al. 2006). Moreover, many bumble bee species nest below ground, providing some insulation from outside heat.

Bumble bee hives that lacked worker bees, when the heat wave hit, may have been at greater risk of perishing.

In the Summer of 2021, Oregon experienced a significant extreme heat event. Bumble bee species that started their nests in the spring had large numbers of smaller workers when the last heat wave hit. Others, like the Brown-Belted Bumblebee (B. griseocollis), were almost entirely large queens that had yet to produce worker bees. Bumble bee hives that lacked worker bees, when the heat wave hit, may have been at greater risk of perishing.

Bumble bees will alter their foraging time to avoid extreme heat. During the extreme heatwave of June 2021, they were seen foraging as early as 5:30am and as late as 9pm. However, these behavioral shifts in foraging time may not be enough to protect the hive. Recent research suggests that extreme heat events are associated with widespread local extinctions in bumble bee species (Soroye et al. 2020).

Do trays of water help bumble bees in a heatwave?

Because they don’t appear to rely on water evaporation to cool their nests to the extent that honey bees do, bumble bees are not likely to take advantage of small trays of water.

What about other bees and heatwaves?

Select plants that support many types of pollinators

Sunflowers are a great example of a plant with an exceedingly long tap root that provides good food for bees even when the grass has turned brown.

During a heat wave it’s important that nectar and pollen providing plants are not stressed and are ready to start working when the bees show up. Make sure to water your plants in the evenings and use a moisture probe to ensure your plants are not drying out, particularly in container gardens. Additionally, select summer-blooming plants that do well under heat stress and don’t need a lot of watering. For example, sunflowers are a great example of a plant with an exceedingly long tap root that provides good food for bees even when the grass has turned brown. Lavender is another reliable drought tolerant plant that bumble bees adore.

*Douglas aster supported more bee species than any of the other native plants tested in the OSU Garden Ecology Lab field plots.