HomeWeed of the MonthThe Peg Bundy of Plants

Orange Hawkweed is a dandelion’s beautiful but unwanted relative;  the type that comes uninvited to visit, refuses to leave, and does nothing but sit around watching television and eating bonbons.  If you have ever seen the old comedy, “Married with Children,” you will know that the Hawkweed is the Peg Bundy of flowers.  The plant was introduced as an ornamental, and you can see why.  Its colors range from yellow to deep rust to nearly red.  Normally those colors would make them invisible to bees, but the petals also reflect UV light (which is an attractant to bees and other pollinators).

Family resemblances to the dandelion are seen in the flower shape, stalk and the seed dispersing puff.  It has no known use or benefit other than its looks.  While it is not toxic to humans or animals, it is far from harmful.  The plant aggressively takes over the land, pushing out native plants that animals rely on for sustenance.  Animals will not eat the weed, so there is the potential for range and pasture animals to starve.

Hawkweed reproduces via seed dispersal, side running roots (stolons), and rhizomes.   As such, it is listed as 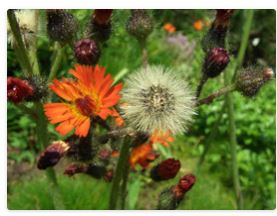 an “A” invasive weed in Oregon.  Washington State considers it enough of a threat to prohibit sale, transportation or distribution (the plant itself or included in seed blends).

The plant can be found anywhere:  meadows, grassland, ranges and pastures.  As with many weeds the best offense is a good defense.  Make sure your soil is healthy and undisturbed as possible.  When first sighted, remove all plants parts.  If you identify these autumn colored beauties in a pasture or in the market, please contact 1-866-invader to report.

HSWCD Board Meeting at HC Chamber of Commerce