This is a goathead, also called puncturevine.  It is also aptly named Terror of the Earth.  Stepping on a Lego during the night is nothing compared to getting one of these stuck in a toe.  Anyone walking a dog near a puncturevine patch will inevitably have to stop and remove a burr or two so your companion can keep using all four legs (can you imagine what it must be like to an animal without a helpful human nearby?).  The goathead is sharp enough to puncture bicycle tires*.

The leaves can be toxic to livestock (primarily sheep) if eaten in great quantities.  The seeds can damage an animal’s digestive system, but (in an emergency) humans can eat it as it is a source of protein, iron, and Vitamin C.  Herbalists claim the weed can lower blood pressure (if it is consumed in tea, not stepped on) and help genitourinary functions for both men and women and aid liver function.  Topically it can alleviate eczema.

The plant is native to southern Europe, southern Asia, northern Africa (this website indicates on subspecies is the national flower of the United Arab Emirates:  https://www.desertortoisebotanicals.com/blogs/news/sonoran-plant-profile-puncture-vine), and it is making its way to Harney County.

The plant lies close to the ground and likes compacted soil and rocky conditions.  It has a five-petal yellow flower, hairy green leaves one to three inches long, and an extensive root system.  Seeds can lie dormant for five years.

Puncturevine can be removed manually if the entire plant is removed.  All parts (including seeds that fell off during removal) should be put in a plastic bag.  Hoeing and Tilling has reduced the plant somewhat.  Oregon has used weevils in some cases.  Postemergent  herbicides can work (the younger and smaller the plant, the better).

*for bicyclists, there is hope as well.   Kevlar, used in bulletproof vests, is a component in a tire liner to protect the innertube.  Google or talk to a local repairman. 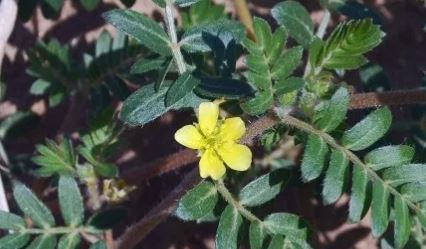