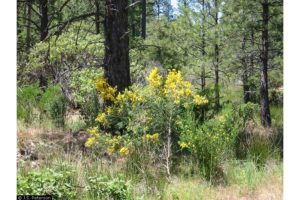 The yellow blossoms of scotch broom provide a dramatic splash of color across the landscape and along roadsides in late spring and early summer.  Thought to be quite beautiful, it was introduced to California from the Mediterranean as an ornamental by European settlers in the 1850’s. Other uses included stabilization of eroding soils and the making of brooms, as in the name.

Scotch broom is now so widespread in western Oregon that it is considered endemic, or “native to the area”.  A wolf in sheep’s clothing, it’s actually a noxious weed that is devilishly clever and persistent.  It rapidly invades disturbed ground along roads, trails, and powerlines, as well as in fields, forestland, and recreation areas.  It becomes the dominant vegetation and crowds out the truly “native” plants.

Scotch broom, a member of the pea family, can be found in at least 27 states across the U.S., including Oregon, California, Washington, Idaho and 20 states on the east coast.

The Oregon Department of Agriculture lists Cytisus scoparius (aka scotch broom) as a “Class B” noxious weed with economic importance and recommends that it be managed and controlled. 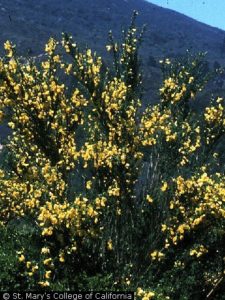 The cost of control and lost productivity on private and public lands in Oregon is estimated at $47 million dollars annually by the Department of Agriculture. Control of scotch broom generally requires multiple treatments.

Scotch broom threatens many native plant ecosystems in Oregon, especially the diminishing Oregon white oak ecosystem found in the Willamette Valley.  It is capable of forming a monoculture, suppressing and dominating other vegetation. Native trees, shrubs, and grasses are all eventually subdued by its superior biology that includes prolific seed germination, long term seed viability, and rapid early growth.

Its dense stands reduce open vegetation types. The result is a significant loss of habitat for butterflies, native birds, reptiles, amphibians and mammals and a greater fire hazard.  Scotch broom is unpalatable and toxic to wildlife, as well as domestic animals and humans. And its pollen can make life miserable for allergy sufferers.

Scotch broom is seemingly capable of growing just about anywhere there is disturbed ground such as along roads and powerlines, in farm and forestland, and on hiking trails and recreation sites.  Most typically, it is found in areas with full sun at elevations below 2000 feet.  As a legume, it fixes nitrogen in the soil, so is capable of growing on poor soils as well as superior ones.

It is a robust plant with several characteristics that contribute to its success.  Individual plants produce anywhere from hundreds to thousands of seeds each year. Seed dispersal occurs when the seed pods mature and dry out. They pop open and shoot the seed anywhere from three to fifteen feet from the parent plant. Seed is also carried by large animals in their fur or on their feet, and by birds and rodents who eat them and deposit them elsewhere. Even ants have been observed carrying seeds and contributing to its spread. The seeds have a hard coating, permitting them to remain viable for decades.  Estimates vary from 10 to 80 years!

Dense stands develop from seed germination and rapid early growth of up to three feet in the first year.  This gives scotch broom the “jump” on native vegetation. It is very tolerant of temperature and drought weather extremes. 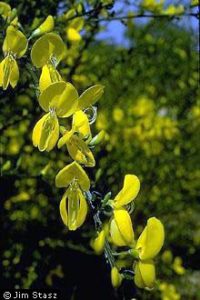 Scotch broom is considered a beautiful evergreen shrub.  It can grow up to 8 feet tall.  The multiple dark green, woody stems may or may not have small individual or small clusters of leaves. The creates a striking contrast to the abundance of yellow flowers that generally appear in May.  Some plants display a yellow and red flower that is even more remarkable.  The blossoms mature into flattened pods that resemble pea pods, containing up to a dozen seeds.  If you listen quietly, a sound like the snap, crackle, pop of Rice Krispies is apparent when mature pods pop open and eject their seeds.

Scotch broom can be confused with the less common Spanish broom which has fewer round stems per plant, very few leaves, and larger yellow flowers.  Portuguese broom is also very similar.  It is a longer lived and larger plant that can reach twenty feet across.

Control of scotch broom requires long term monitoring and repeated treatments over many years because of the long term viability of the seed bank it produces.  Any disturbance of the soil can result in additional germination of dormant seed and create new populations.  If possible, attempt to control scotch broom early in its establishment and before seed pods mature.

Hand pulling and digging up young plants can be accomplished to control small patches. Early spring is the best time for this as soils are still moist and roots are more easily removed.  Root systems go deep on more mature plants, making pulling difficult and often ineffective. Tools can be used to provide leverage when pulling plants.

Cutting or mowing can be done on gentler ground, but the plants must be cut below the lowest limb and as flush to the ground as possible to prevent re-sprouting. Cutting tends to be most effective when the plants are drought stressed in late summer.

Repeated prescribed fire has been used to attempt control with varying results by encouraging seed germination and killing small plants. There are obvious risks of fire escape that contribute to making this a rarely utilized method.

Some damage to scotch broom is gained through the introduction of three biological agents, but none is considered an effective control.  A bean weevil, a seed weevil, and a moth have been approved for release in Oregon: Exapion fuscirostre, Bruchidius villosus, , Leucoptera spartifoliella, respectively. They can reduce seed production and shorten the life span of scotch broom.  For more information contact the Oregon Department of Agriculture, Noxious Weed Control Program, 503-986-4621.

Toxicity to scotch broom by domestic livestock limits grazing as a control method, although some goats can apparently browse the plant without ill effects.

Herbicide application to the cut surface of scotch broom stems can improve control if done immediately after cutting.   In addition, there are herbicides that are labelled for scotch broom control when applied to the plant and to the soil as a pre-emergent that inhibits or kills germinating seeds.

For recommendations on chemical control, please review the information provided in the references below, including the PNW Weed Management Handbook and to Herbicide-resistant Weeds and Their Management, PNW 437. Both are available from OSU Extension at https://catalog.extension.oregonstate.edu/. Additional advice may be obtained by contacting your local ag or farm store and speaking to a licensed herbicide applicator. You can also Ask an Expert at OSU Extension at http://extension.oregonstate.edu/mg/metro/ask-an-expert.

Warning!  Use of herbicides requires specific knowledge about the products, rates, timing and methods of application for personal safety, to avoid unintended resource damage and for the greatest desired control.  A pesticide license may also be required.