Henbane (aka/stinking nightshade) has an interesting history.  In ancient times it was combined with other botanicals to create a psychoactive potion which was used for medicinal or religious purposes.  During the middle ages it was associated with witchcraft.  It is thought the “hebenon” used in Shakespeare’s play Hamlet was henbane.  In liquid form the henbane was poured into the ear of Hamlet’s father causing his death and setting into motion the blood bath read and enjoyed by high school students ever since.  The “something rotten in Denmark” may have been a weed.

Vikings were also said to use the plant.  There were old Norse soldiers (the berserkers) who ingested henbane and went into battle wildly agitated.  Today when someone is out of violently out of control, he or she is said to have gone berserk. 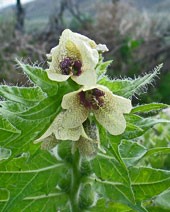 In short, henbane could give some of today’s abusive drugs a run for their money.

The plant originated in Eurasia and is now worldwide.  It is intentionally grown for pharmaceutical purposes in traditional medicine and is used to treat bone pain, rheumatism, toothache, asthma and cough or stomach pain.  It would be best to not use henbane without the direction of a skilled herbalist or pharmacist as it is highly toxic.

But…mostly it is an invasive weed.  Aside from psychoactive effects or death with humans it is also harmful to cattle, fish, birds and many wild animals.  Pigs don’t seem to have a problem with the plant and actually seem to like it.  And as an invader it pushes out native plants.

Like many invasive plants, it can be found in disturbed soils, roadsides and ditches.  It can actually grow anywhere but marshy conditions.  As with any plant you may wonder, take a sample into the Harney County Weed Management Program.