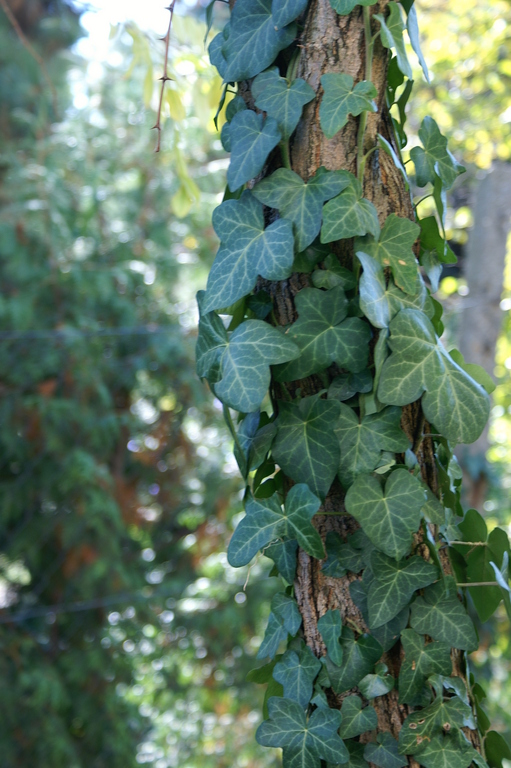 English Ivy is a plant that many people seem to like. This is really a plant they really ought to hate! While it is appreciated in landscaping as a dominant, evergreen groundcover and something you “don’t have to mow”, its ability to crowd out other plants is just what makes it so sinister in parks, natural areas, and forestlands.

English ivy was incorrectly named. Introduced as an ornamental in the 1700’s by European immigrants, they likely didn’t realize the plant actually originated from central Asia. It is now prolific in western Oregon, where it is considered very invasive. It can be found in eastern Oregon, as well, but is not able to compete as successfully in dry climates.

Atlantic ivy (Hedera hibernica) is also common in the Pacific Northwest. It originated on the European Atlantic coast. Subtle differences make it difficult to tell English ivy from Atlantic ivy. Many infestations of what is thought to be English ivy are actually the Atlantic variety.

The Oregon Department of Agriculture lists Hedera helix (aka English ivy) as a “Class B” noxious weed with economic importance and recommends it be managed and controlled. 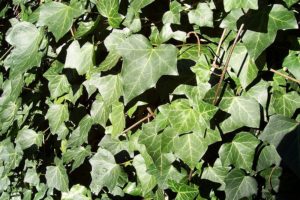 Ivy creates a dense mat of vines and intertwines with understory shrubs, rapidly shading out the more desirable native vegetation. This can lead to greater chances of erosion as deeper rooted native plants are replaced by the more shallow rooted ivy. Its mature stage is triggered when it climbs into the crowns of trees and receives more light. It can then become a threat to the overstory host trees, causing windthrow or breakage of limbs due to its weight. The rapid transformation of a natural site caused by English ivy can degrade habitat and reduce the diversity of animals found there.

Leaves and berries can be toxic to humans and cattle if eaten.  Some people are sensitive to contact with the leaves and get dermatitis.

The cost of control in some parks and natural areas has been reported as much as $3,000 per acre. 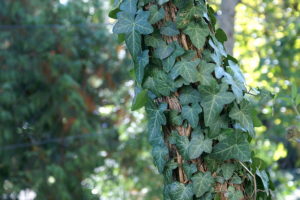 English ivy prefers moist soils in areas with summer shade and winter sunlight. It can most commonly be found in disturbed sites of natural areas, parks, woodlands, and along stream corridors.

English ivy can reproduce from seed or from vegetative sprouting. Birds can transport seed for great distances, starting new infestations in disturbed areas. Juvenile plants can remain in that stage for up to 10 years and mature plants can live upwards of 100 years or longer. One plant in England was recorded to be over 400 years old! 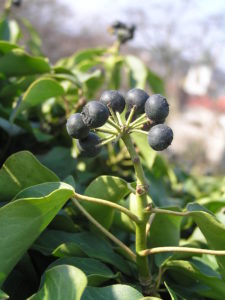 The leaves of English ivy are most notable for their waxy surface and leathery feel. Leaves are alternate along the stem and differ slightly between juvenile and mature growth. Mature growth leaves are up to 15 mm long, ovate to diamond shaped, dark green in color and have white veins. Juvenile growth has leaves nearly twice as long with 3 to 5 lobes. Gray hairs can cover the lower surfaces on the leaves during both stages of growth.

English ivy produces flowers and berries when light and nutrients are adequate, typically when it has reached into the crowns of trees. Clusters of five-petaled, light green to white flowers are produced in the fall. Dark blue to black berries ripen in the spring, each with 1 to 3 seeds. There may be thousands of berries produced per plant.

The rooting structure of English ivy is shallow, yet vigorous. It can root from the nodes on the stem and forms aerial roots that allow it to cling to and climb surfaces like tree bark.

The plant collectively referred to as English ivy includes three species. English ivy (Hedera helix) and Atlantic ivy (Hedera hibernica) are look-alikes with minor differences in the leaf. The third species Hedera canariensis has red stems and a three lobed leaf that makes it easier discern.

Control of English ivy requires long term monitoring and repeated treatments. Any viable root fragment can result in recovery of plants and allow the infestation to begin infestation again. Integrated Pest Management (IPM) is a combination of methods that defines the best approach.

Hand pulling and digging up juvenile plants can be accomplished to control English ivy. However, repeated treatments and long hours of work should be expected. The ability of the plant to regenerate from root fragments is what makes this method so labor intensive. The key is to remove all the roots! Remember to protect yourself from potential dermatitis due to contact with the plant.

Prioritize cutting vines from trees. This effort removes the seed source and maintains the health and form of the overstory trees. Using a saw or loppers, cut the vines at a comfortable height and remove everything below the cut line from completely around the tree. There is no need to remove the portion of the vine left in the tree, as it will eventually fall down on its own.

Pulled and cut material can be mulched on site by using loppers or shears to cut the vines into small pieces and piling it in small piles.

Goats and sheep have been known to graze English ivy, but it recovers from the roots that are left behind. Fire has also been tried, but the foliage does not carry fire well. Neither of these methods is recommended. There are no known successful biological controls of English ivy.

Herbicide application has been effective when accomplished by experienced applicators who follow prescriptions meticulously. It is made more difficult due to the waxy leaves of English ivy and its habit of growing intertwined with other vegetation.

For recommendations on chemical control, please review the information provided in the references below, including the “PNW Weed Management Handbook” and the “Herbicide-Resistant Weeds and Their Management, PNW 437” guide. Both are available through the OSU Extension Service. Additional advice may be obtained by contacting your local ag or farm store and speaking to a licensed herbicide applicator. You can also “Ask an Expert” at the OSU Extension Service.

Warning! Use of herbicides requires specific knowledge about the products, rates, timing and methods of application for personal safety, to avoid unintended resource damage and for the greatest desired control. A pesticide license may also be required.